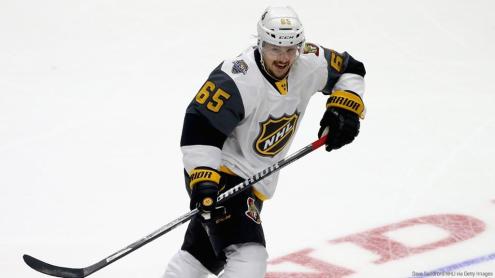 Wouldn’t it be like the Ottawa Senators to not trade Erik Karlsson?? With all the turmoil, all the stuff behind the scenes, the tire fire that continues to rise, the model organization for relocation because their owner is one who should have his franchise taken away from him….this is the thing that would be the most Senators things ever.

Last week, it seems like the wheels were in motion for Karlsson to go to the Lone Star State and become Sheriff Erik for the Stars. Then later in the week, the Tampa Bay Lightning looked to be a late entry into this ordeal, join by a New York Metro team in order to get the deal done and the money to equal itself.

Yet, according to Lightning GM’s Steve Yzerman– there’s no deal to be done. Nothing is imminent and with the long-term signing of Nikita Kucherov– it may not be. With the Kucherov signing, it ties up $65M for 12 contracts in 2019-20, which would be Karlsson’s free agent year and would need a major trade/salary dump to get the long-term deal of Karlsson’s under the Bolts’ cap.

So…are the Stars still in it, because it’s been pretty radio silence since the Tampa deal came out late last week, but you have to think they’re back to the front-runners, no??

It’s eerily quiet on Karlsson. Like that awkward quiet after you haphazardly confess your love to your 10th Grade History teacher after learning about Lewis and Clark….or something that may or may not have happened.

While it’s something that could just be the money people crunching numbers to make sure it works on the contract side of things, this almost seems like it won’t get cured by training camp. Don’t ask me why I think that, but you’d think that teams would be stumbling over themselves to get Karlsson sooner rather than later in order to start their pitch to keep him around on an eight-year extension.

I don’t think this is something even Pierre Dorian and the Senators can fuck up. Sure, it’s your franchise player, sure he’s the only think keeping people in the stands at Canadian Tire Centre, and it’s something you need to be gentle about in terms of not rushing to trading a guy for a subpar return that won’t help this rebuild or whatever the hell it is that the Senators are doing. Let’s be honest, Karlsson is the tip of the iceberg, as Craig Anderson has requested a trade, Bobby Ryan’s contract is an albatross, and there’s not much to be hyped about– even if Matt Duchene plays better and gets to scoring at any kind of responsible clip.

If they don’t trade him by the start of the season, it could be some kind of silver lining and maybe give some hope to a re-signing after a summer/start-of-season-long reconciliation. However, it’s not looking that way. You can assume that Karlsson is packed up, ready to move to wherever he’s getting dealt next and thinking Ottawa is an afterthought for the beginning of the season.

It’s a very lose-lose situation for the Senators overall, but for Karlsson– it’d be a new start in a new place. And a place that hopefully has some direction.