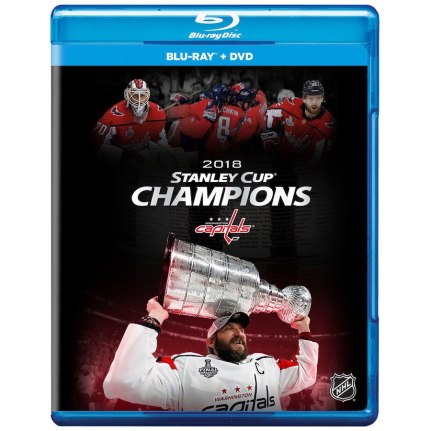 This is exactly what the title describes– it’s my review of the Caps Stanley Cup DVD. Despite it taking almost 30 years for me as a fan to get this DVD….what would be another couple days, as I saw many people getting their DVDs a couple days before release and me getting mine a couple days after– way to go Fanatics, North Dakota, and USPS. Regardless, this was the automatic purchase for me and in all honesty, I was pretty excited considering the NHL Productions department usually does a bang up job when it comes to molding their footage into a solid collection of a season, career, whatever.

This is a long read. It’s very meandering– hence the title of this. So– here’s a TL;DR portion for it from me.

PROS: Interviews with players, personnel, and everyone involved; solid game footage and variety of calls
CONS: Censorship of language on a DVD; terrible bonus coverage; not enough time dedicated to some of the regular season and some playoff series

Okay, so now pack a lunch because it’s a quite thorough thing from me, trying to capture the moment like Dicky Dunn.

The DVD starts with the trailer that the NHL put up to promote the DVD itself, which was players and personnel talking about the city and what it meant to bring the Cup to the area. However, the proper DVD started with a history of the Capitals– coming into the NHL in 1974, being the worst expansion team in history, then almost moving. However, thanks to the “Save the Caps” campaign in 1982, coupled with the trade that brought Rod Langway to DC; the luck changed for the Caps. It talked about the top picks in Mike Gartner, Bobby Carpenter, and Scott Stevens, which led the Caps to the consecutive playoffs, then to the Cup Final in 1998 when they got swept by the Red Wings.

Interestingly enough, the film completely discounts the Jagr Error in Washington, going right from the Cup Final in 1998 to Abe Poulin selling the Capitals to Ted Leonsis then to the Alex Ovechkin Era and how he was a face off the franchise. Shocking how they’d just zoom right over the bitter times that got the Caps in the position to pick Ovechkin. In that, they spoke on Ovechkin becoming the face of the franchise and city, while also building a young core with Nicklas Backstrom, John Carlson, Jay Beagle, and others.

For the season itself, the film talked about how while the team was able to build themselves up into a powerhouse, they fell short often and most of the time to the Pittsburgh Penguins. The small training camp montage had Barry Trotz talk about how the team had a different attitude and were looking to find an identity after some key players from 2016-17 had moved on. The season started well, but the film also talked about the horrible months of October and November, especially on the goaltending side of things. It was after a bad loss to Colorado where Trotz had a team meeting and laid it on the line. According to John Carlson, the biggest message is that something wasn’t working– either the players or the coaching staff– but they needed to find out what it was and fix it. After that, it seemed to all click– snippets of the Caps getting better, the Stadium Series game, and onto the Caps winning another Metro Division title. Towards the end, they did foreshadow a Braden Holtby comeback, focusing on how Philipp Grubauer was outplaying Holtby down the stretch.

As the playoff started, the question of goaltending was the first thing they mentioned about and how Grubauer took over for Holtby at Trotz’s instinct. The story of the first two games was how the Caps lead in both games, but couldn’t hold a lead– thus the change during Game Two. After the Game Two loss, going down 0-2– the Caps were talking about not getting the bounces, with Craig Laughlin saying that this is a team that was different from other teams that had folded before. Game Three was a big focus with the bounces they needed, the kills in OT they needed, and then the turning point of the 2OT goal that bounced off Lars Eller and Zach Werenski to make it 2-1 and molded the rest of the series. After that series was done…it was onto Pittsburgh.

Of course, the history between the Caps and Pens in the playoffs was played up– with Matt Niskanen and Blaine Forsythe talking about the mental block when it came to playing the Penguins, but the mentality seemed to be changing. Niskanen then admitted that old feelings came in after Game One because it was the same song, it seemed. The attacking mentality was one that guys on the team had talked about not really having before, but actually putting into practice this time– especially in Game Three in the back-and-forth affair with the Pens, which ended in the Alex Ovechkin goal late to win it for the Caps. Not much was said about Game Four, overshadowed by the Tom Wilson suspension; which they rallied behind and tried to answer and “Do it for Tom.” For Game Five, the response of the third period after a garbage second was a catalyst for the win, which dealing with the loss of Backstrom to a hand injury– but again, the mentality of coming back to play and have a killer instinct. That carried to Game Six, where the things shifted because of the Caps going from run-and-gun to defense with Wilson and Backstrom out. Then the Kuznetsov goal– which had everyone shocked and had everyone turn a page on the Caps playoff history.

The narrative for the Tampa Bay series was people saying the Caps were too beat up and may have one a personal Stanley Cup in beating Pittsburgh. As we know, that wasn’t the case as they came out in the first two games, IN TAMPA, and controlled the play. They also mentioned the road games and why there so successful being that they were able to do things together and bond as a team, as well as feeling less pressure. Yet when they went back home, it was a different team with frustrations coming through. A big Games Three and Four rolled back for the Bolts in Game Five, where they took a big Game Five, which made the questions from the media about the old Capitals coming back, but the energy of Game Six from the team and the fans was something that kept the dream alive and kept the team-first mentality, everyone talking about how it’s not the same old Caps teams in the past. This team had a purpose. That purpose showed through the Game Seven start with Alex Ovechkin getting things going early and the Caps not letting up, allowing Braden Holtby to have back-to-back shutouts to finish the Bolts, while also featuring how Andre Burakovsky stepped up after being a scratch for Game Five.

As they shifted to Vegas, the start was about how odd it was for some players to go there for work at this time of year rather than relaxing, as well as this being an unlikely Cup Final for anyone to think of at the start of the season. The Caps personnel gave plenty of respect to the Golden Knights and what they accomplished, especially with a former Cap leading the team in George McPhee. Going into the atmosphere of Vegas and the players not knowing the scope of this game or atmosphere. The gunslinging first game was fully highlighted with the lack of structure and neither team not knowing how the series would unfold. Game Two was the adjustment of the Capitals, being more aggressive and adjusting their game play as such. The Kuznetsov injury was mentioned, but their adjustment as such gave another test to this already tested team, which is when Ovechkin got his first Cup goal, as well as goal by Orpik– which really popped the rest of the team when he got his first in a year-and-a-half allowed another character guy to step up for this team. Another turning point was the two-man disadvantage with a one-goal lead and how the Caps were able to shrug that off with the work and determination they put into it. Then…The Save. The shock of everyone across the board and how much the Caps needed that for momentum for not only that game– but the series going back home.

Speaking of coming home, the fans were on full display– TJ Oshie and Niskanen talking about them trying to avoid traffic and how much they turned out and how loud they were for Game Three. Alex Ovechkin’s play of doing everything they needed and how much of a captain by leading he became fed down to everyone on the team. Guys holding others accountable for doing the right thing for the moment. The crowd staying behind the team in and out of the area, but after Holtby’s brutal giveaway, the Caps kept on the Knights, which would lead to the Devante Smith-Pelly goal, erupting the Caps faithful with the Caps winning Game Three. Before Game Four, the fans at Kettler turning out and showing their support and being proud of the team for the area was put ahead of the game. The power play was in prime focus with the goals that the Caps put up with Oshie getting the first one and how it could take away from a team, as it did with the Knights. Then Carlson’s goal putting the team up 4-0, then Brett Connolly making it 6-2 to put the team one game away from the Stanley Cup.

After Game Four, the players talking about how close they were and how tough it was to sleep knowing how close they were. Then Trotz and the players talking about how long some greats took to win their first and how the younger guys should soak it in because it may never happen for them again. With the first being a territorial match-up, then the second period being a big back and forth with Vrana and Ovechkin scoring, though Vegas having the lead after 40 minutes. After being upset in-between, the Caps started to get the positivity back up and focused into the third period. After Smith-Pelly’s goal, Kuznetsov said that he believed that they could actually do it, while everyone knew as it got later, mistakes would happen and you can capitalize on it. Cue Lars Eller. After that goal, everyone knew they had to finish and it was “prison rules” according to Niskanen. And it was over…the Caps win the big one and the crowd erupts back in DC and from Caps fans around the world.

Players shared their emotions as they lifted the Cup, as they won the ultimate prize, and a look back at their family’s sacrifices, and the relief it was to have that final check-mark and to have the Stanley Cup in their possession. Clips of the locker room celebration and the parade were shown as it ended out with the film. The unity of the fans, the unity of the area, and how much the fans meant to the players and wanting to be a part of the DC community.