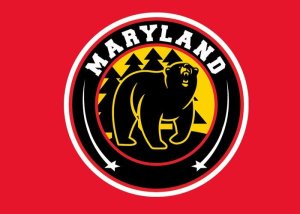 After weeks of waiting, the new Maryland NAHL has names and colors. As mentioned prior, the colors are the Maryland flag colors, but the name is a bit odd to the idea of Maryland.

The Black Bears will be the new identity, named after the main holding of the ownership, Black Bear Sports Group. The black bear population in Maryland is primarily in the Western part of the state, very rarely going into the suburbs. The logo and website for the Maryland Black Bears was revealed today.

The logo itself incorporates the Black Bear Sports Group logo with a wilderness scene, much akin to the Minnesota Wild motif. The colors are black, red, yellow, and white.

While it’s not the Crabs or anything of that sort, it’s a solid name and solid logo. This is the first of many things to come for this new team.