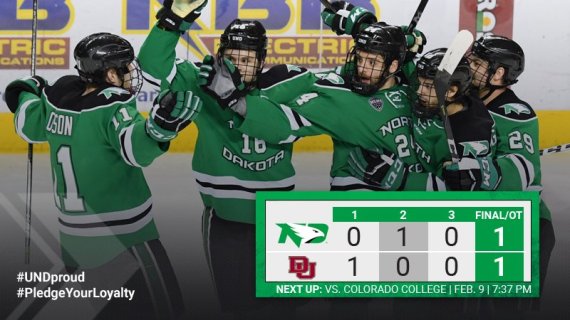 GRAND FORKS, ND– With both Rhett Gardner and Nick Jones still out with injury and Cole Smith suspended for his hit on Adam Plant on Friday, the University of North Dakota showed plenty of grit in the second game of the series with the Denver University Pioneers, with 12,002 at The Ralph, which is the highest of the season for UND. Even with all the players out and defenseman Casey Johnson playing forward, North Dakota came away with another tie on the weekend– this time by the count of 1-1.

North Dakota had some visitors, as Tucker Poolman (Winnipeg Jets), Nick Schmaltz (Chicago Blackhawks), and Drake Caggiula (Edmonton Oilers) were all in attendance for their alma mater during the NHL All-Star Weekend. However, despite the old UND guard in the building, Denver was first to strike, as they held possession of the puck most of the first half of the first period. They finally got through after Kohen Olischefski throw a shot on from an odd angle that beat Cam Johnson, as Johnson was unable to hug the post enough to keep it out. The rest of the period was possessed by Denver, who outshot the Fighting Hawks 9-5 in the period, with UND getting their first shot of the game 13:52 into the period. Though Denver got a late power play due to a Grant Mismash interference, nothing came of it and the period ended 1-0 for Denver.

“I don’t even know,” said Johnson of the goal during post-game. “It just found a hole there. But I felt good, it was a weak goal. I like to think that’s how our luck is going, just not getting the bounces. I just tried to refocus and think of it as a 0-0 game.”

A tense moment early in the second, as Andrew Peski let a shot from the point go that hit referee Nick Krebsbach in the hand, as he was protecting his face; sending the former AHL official down to the ice. After a few minutes and some work on the bench, he was up and ready to keep going. While Denver did get some chances, they also got a crucial penalty after Liam Finlay bowled over Cam Johnson to get a goalie interference call. In that ensuing power play, Christian Wolanin got his eighth of the season, blowing a shot over the glove of Tanner Jaillet.

Not much to speak of in the third, though Denver did have a scramble in front, where Cam Johnson was equal to the task. Plenty of clogging up the shooting and passing lanes from both sides, resulting in a second overtime in as many nights. Very few chances for each side on the overtime period, which resulted in yet another tie between these two teams. In the NCHC overtime, Ian Mitchell scored for Denver after Hayden Shaw’s pass got intercepted Logan O’Connor in the UND offensive zone, which moved to Mitchell, who deked out Johnson for the NCHC extra point. The NCAA official tie is UND’s eighth of the season. 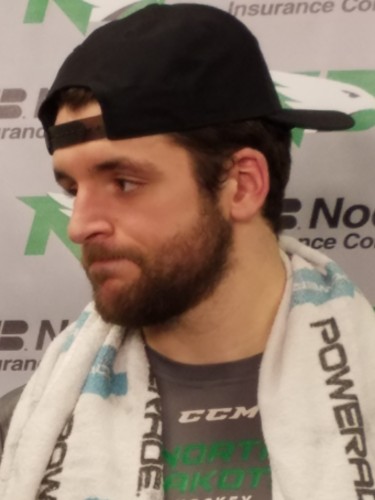 “A tie gets frustrating,” mentioned Wolanin on the result. “For not having our full roster and playing a great team like Denver, we showed heart and resiliency. To get two ties out of it is okay. Just okay.”

The main point of this week was the special teams. Last week, UND gave up six power play goals in their weekend set against Duluth and it was a sticking point for the team in the practice this week.

“When you have someone like Coach (Dane) Jackson, who puts his heart and soul into everything; for him to come in and think that the PK didn’t do their job– we held a lot of meetings for penalty kill this week,” said Wolanin. “In Duluth, it wasn’t a matter of Coach Jackson not preparing us enough, it was us being undisciplined.”

The Fighting Hawks are off next weekend, but will be back home on February 9th and 10th against Colorado College. With the bye week, UND hopes to have a lot of their walking wounded back– as it was the second game without Rhett Gardner and Nick Jones. They’ll also get Cole Smith back from suspension; though Ludvig Hoff will be away for the Olympics.