With the NHL 100 game behind us and the uniforms really looking more like the next 100 years for the NHL (in the terms of aesthetics), it makes me wonder if there’s more that could have been done for the game and celebration.

It was an odd outdoor game situation– the alumni game was a split-squad for the Senators, the game itself was surrounded by things Senators owner Eugene Melnyk said in regards to moving the team, and there wasn’t too much hype for it until a couple days before the game (at least in my eyes).

Yet, through throwing out stuff on Twitter— mostly in jest– I do wonder if there’s something that really could have made this NHL 100 situation a much more memorable experience. There’s only so much you can do with the players themselves because of their game schedule, practicing in the elements, and the health of the players in general. However, I think there’s something that could have been done a little better.

First, rather than a musical act (all due respect to Bryan Adams), they should have done a little musical play of that first season. Have actors out there in the older gear going around the rink as they would during the intermission segments in the real arena. It would be a great nod to the actual first season of the NHL, remembering the heritage of the game, as well as showing off those sweet duds of the 1917 era.

Second, they should have had more events surrounding the “Top 100” players in NHL history. The NHL made a whole to-do about this list and yet doesn’t seem like many of those players were able to come out. Sure, the modern guys were actually in-season, but you have to think there were more guys from the earlier eras available to do things for this weekend’s celebrations.

Sidebar: It seems really odd they would present the “Best Moment in the NHL History” thing during the game-play on the ice. Sure, they wanted to trot out either Mario Lemieux or Bobby Orr; but the players are already freezing out there and you have them standing around as this thing is going on?? A little silly when you could have done it during an intermission.

Third– recreate the first games. Again, either actors or beer-league players doing the first games of Canadiens vs. Senators and Wanderers vs. Arenas in one of the outdoor rinks Ottawa has around the area. Give them as much older gear as safely possible and just have a little fun with it. I’m sure those participating would have soaked it all in for a chance to “re-write” history and just to be apart of the celebration. One of the biggest things is that the NHL wants to be inclusive– so why not pull out all the stops to actually bring people into these big events when they happen?? 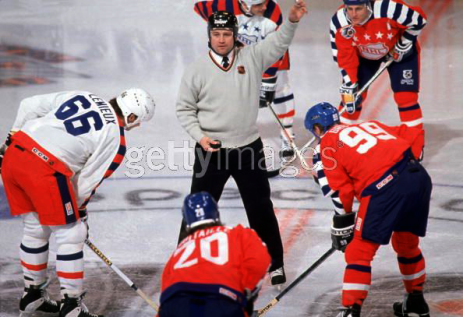 Finally– the uniforms on ice. Like I said, it’s like they had a look of “Turning Ahead the Clock” like the MLB did in the mid-90s. For a game like this, you’d think that the NHL and Adidas would have really brought the Heritage idea back to this game like they tried to do with the Winter Classic. Whether that’s just a Winter Classic gimmick or not, I don’t know– but for a game of this magnitude, something should have been a little more throwback. They could have done like the 75th Anniversary season with the look (even down to the referees), but they went another route which– hey, their call.

I will give a tip of the hat to the NHL for doing what they’ve done to celebrate their 100 years, but in my head there’s a lot more that could have been done, especially with this game and the weekend around it. Whether it’s logistics of insurance or schedules or whatever– it didn’t happen. But at the end of the day, they did all they could in order to make this a thing that would leave a lasting memory for players and fans. Whether it did or not, only time will tell.