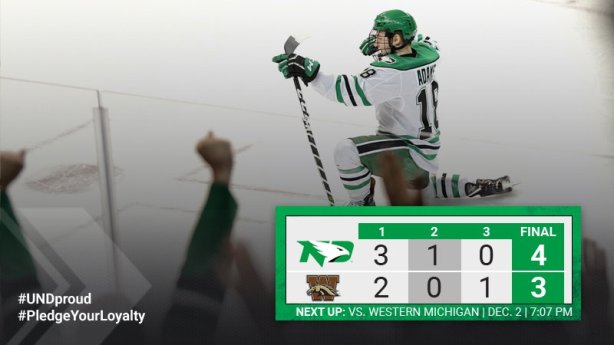 GRAND FORKS, ND– Friday night set the tone for the weekend, as the University of North Dakota took the first game of the weekend set against Western Michigan University 4-3 in a chippy, physical affair that saw many a scrum break out.

UND opened the scoring in the first on the power play, as Rhett Gardner broke up a Western Michigan breakout, which tipped over to Grant Mismash before eventually finding the stick of Austin Poganski, who went five-hole on Ben Blacker to put the Fighting Hawks up 1-0 just five minutes into the game. Minutes later, after drawing a penalty on Christian Wolanin, Dawson DiPietro came down the wing on the ensuing power play over Cam Johnson’s glove hand to tie the game. UND struck back minutes later, while on a 5-on-3 power play, which Austin Poganski potted his second goal of the night from a lovely feed from Jordan Kawaguchi to make it 2-1. 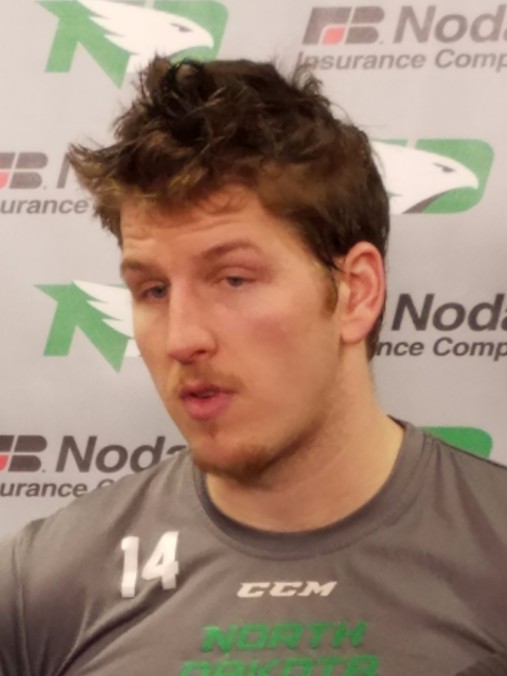 “It’s always nice to get on the scoresheet and help like that,” said captain Poganski after the game, “But things go unnoticed, like Ludvig blocking some shots and there were some big blocks at the end. It’s not always about scoring goals and getting assists. It’s about the little things people don’t see as often.”

Western Michigan tried to challenge offsides, but it was to no avail. Just over a minute later, Ludvig Hoff got in on the action, tipping a shot from Colton Poolman and going over the shoulder of Ben Blacker to make it 3-1 UND. Three minutes after that, WMU cut the lead to one as Brett Van Os deflected a Cam Lee shot to go over the shoulder of Johnson to make it 3-2, which is where the first period ended. It was only the sixth time this season UND had the lead after the first period.

A lot of beating, banging, and exchanging of power plays, but it wasn’t until midway through the second where UND increased their lead. Collin Adams went broke up a clearing attempt, took a skate across the top of the circle and ripped it high blocker on Blacker to make it 4-2 Fighting Hawks. While the play continued to be physical, it didn’t come without issues– as Andrew Peski and Ludvig Hoff left the game with undisclosed injuries.

More physical play until late in the period when Wade Allison got Western Michigan to within one goal on the power play, as he blew by the UND defense of a small dish from Corey Schueneman to make it 4-3 UND. However, UND thought they got the two-goal lead back when Joel Janatuinen put the puck past a laid out Blacker, but due to Luke Bafia being pushed into his own goalie– the goal was disallowed. As the game went along, it got more physical, but UND rode the edge a little too close and then over, getting three penalties within the last two minutes. Thankfully for the face-off work of Johnny Simonson and the defensive play by Gabe Bast, two late-game face-offs in front of Cam Johnson were all for not as UND went on to win 4-3 Friday.

“I thought that was a man’s game out there tonight,” said UND head coach Brad Berry. “It was fast, it was heavy, a lot of up and down the ice. Two teams that have unbelieveable will. It came down to the last play and the last face-off.” 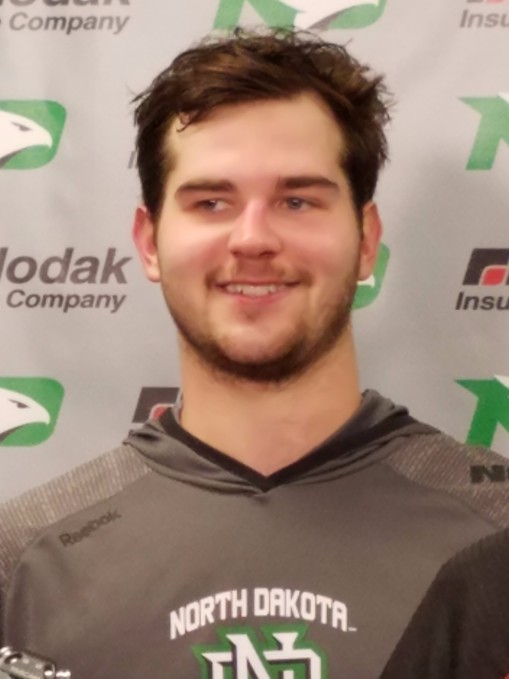 With the win, Cam Johnson goes to 6-2-1 after a four-week layoff when he was injured during morning skate of the Wisconsin series

“It’s been a long month or long eight games, whatever it was,” said Johnson, “But it’s good to be back and good to get a win at The Ralph. I felt good all the way through, but I think I need to drink more liquids before the game. Trying to get the pacing of the way the game speed is as opposed to practice took a bit, too.”

“It was as close to 60 minutes we’ve played all year,” Berry stated. “It’s tough to play a perfect game, especially with a good team on the other side like that. Consistency and the start is something we have to make sure we off-set tomorrow.”