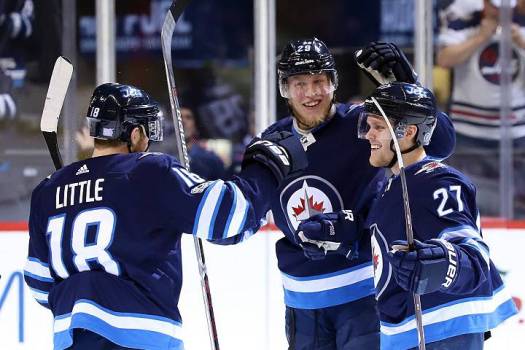 As it stands right now, the Winnipeg Jets sit second in the Central Division and second in the Western Conference overall with a 15-6-3 record. After years of just hanging on in the Central, they seem to be breaking out of their shell and finally reaching their potential that many have said that they could have.

But are they really this good?? My buddy Brian told me on Twitter last night that he wasn’t buying into the hype and the main reason is Paul Maurice. I gave a counter of their goaltending being as unusual as it is– especially since they went out and got Steve Mason as a free agent this summer. While the Maurice thing is a valid point, the owners are looking like geniuses locking up the head coach Maurice and GM Kevin Cheveldayoff to multi-year extensions.

Whatever the reason for hesitation to this success, the numbers aren’t hurting the success. Mark Scheifele has grown a long way from wearing a generic jersey at the 2011 NHL Draft to one of the faces of the team and being tied for the team lead in scoring and being tied for 10th in league scoring. The guy who he’s tied with, Blake Wheeler, has a great story of redemption– going from a first-round pick, hitting free agency rather than signing with his drafted team, never finding his footing with the team he signed with, to finally hitting a stride with Winnipeg over the past couple seasons.

And we haven’t even talked about Patrik Laine, who is a on a bit of a sophomore slump, or Nikolaj Ehlers or Bryan Little– who all have the ability to be primary or secondary scorers for this team.

In my point of contention, the goaltending is something that has never been too much of a strong point from Winnipeg. With Ondrej Pavelec leaving, it could have been a spot to get a big name to help get the team over that hump….and they got Steve Mason. And Mason was Mason in the first couple games (0-3-1 in four games). Luckily, Connor Hellebuyck has been a savior for this team with a 13-2-2 record on the season. How long that will last is anyone’s guess– but keep riding the wave of winning until it burst and work it from there.

Defensively, if the top guys can be healthy– they’ll be sturdy there. Tyler Myers is back and contributing in a decent way, Dustin Byfuglien is who he is, and Jacob Trouba could be doing more– but has been fine in his season so far.

Overall– it’s all about how long Hellebuyck can keep his good times rolling and adapts when people figure him out, as well as if guys like Scheifele and Wheeler can stay with their better than point-per-game clip. Add that to the secondary scoring and defensive side getting better offensively– this team could be a consistent force this season moving ahead.

One thought on “Are The Jets Really This Good??”