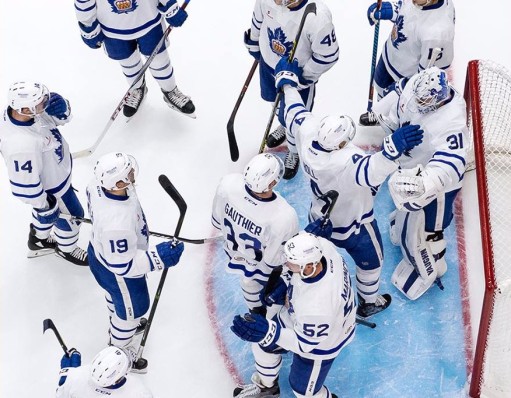 -With seven-straight wins, the Toronto Marlies are again atop the AHL in points, which should be no surprise. The past few years, the Marlies have been the favorites as the season went on, though they have no Calder Cup to show for it…yet. Andreas Johnsson has led the way for the Marlies with 17 points on the year, which includes his current seven-game point streak (4g, 5a). Garret Sparks has dazzled in net with a 1.50 GAA to go with his ten wins on the season.

-The team chasing the Marlies for league supremacy is the Manitoba Moose. After finishing at the bottom of the Western Conference their first two years back in the AHL, the Moose have been quite a surprise this year with their young stars finally getting the hang of playing in the pros. Both second-year pros Jack Roslovic (11g, 11a) and Brendan Lemieux (5g 6a) are better than a point per game– 1.05 and 1.10 respectively– while veteran Mike Sgarbossa (8g, 12a) and Buddy Robinson (7g, 7a) have provided solid secondary scoring. A bigger surprise is the bouncing back of Eric Comrie (8-4-1) who has been solid in net for the Moose with a 2.30 GAA and .927 save percentage in 13 games.

-A round of applause to Caleb Herbert, who finally had his 17-game point-streak snapped on Friday night. The Swamp Rabbits’ forward had 11 goals and 17 assists for 28 points during the streak that began since the beginning of the season. Herbert, unsurprisingly, leads the ECHL in points, with teammate Allan McPherson two points behind him before a trio of Wheeling Nailers pop up– Cody Wydo, Reid Gardiner, and Garrett Meurs.

-With points in seven of their last ten, the Colorado Eagles are making the most of their last season in the ECHL in their title-defense season. Michael Joly is leading the way in the ECHL in goals with 13 and has only one of his 16 games has been held pointless. Matt Register has helped out on the back-end quarterbacking the power-play and holding down play in his own end. All the while, Joe Cannata has been a near-perfect 7-0-1 on the year since being placed in Colorado by the Avalanche from San Antonio.

-Quietly, the Evansville Thunderbolts are having a great sophomore season in the SPHL. The play of Tomas Sholl since he came from Macon, he’s been solid with a 4-1-0 record with a 2.00 GAA in Evansville. Justin MacDonald is leading the league in goals with nine, while MacDonald, along with Dylan Clarke and John Scorcia are point-per-game players. The Thunderbolts also boast a great road record with points in six of their eight road game on the season (5-2-1). With one more road win, Evansville will match their entire road win output from last season.