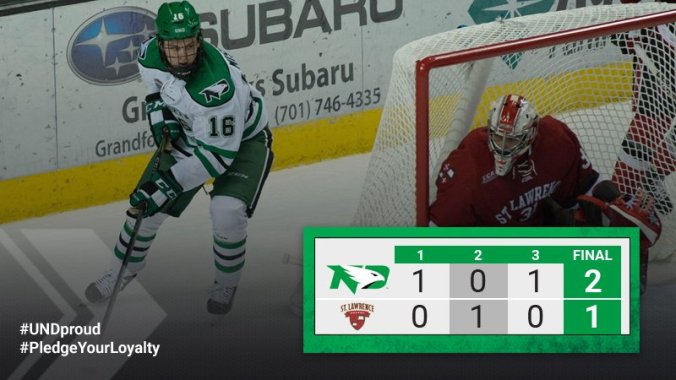 GRAND FORKS, ND– For Collin Adams and the University of North Dakota team, it was better late than never on Friday as the Fighting Hawks got a late goal from the freshman to propel them by St. Lawrence University 2-1 in front of 11,221. The goal, on the power play, was Adams’ second of the season and the second power play goal by UND this season in 16 attempts.

“Bottom line, we found a way to win,” said head coach Brad Berry after the game. “It wasn’t pretty, we have a lot of things to work on. I don’t think we didn’t sustain enough offensive zone pressure. We have to play simpler, make quick passes, and get shots on net.”

St. Lawrence, led by the play of junior goalie Arthur Brey, gave UND fits during the game, with the Mark Morris-led team clogged up the middle, forcing UND to the outside and not giving them any good lanes to shoot. When UND did get opportunities to shoot, Brey had a clear vision of it thanks to his defense clearing out the middle.

“Give them credit, St. Lawrence did an excellent job of getting in front of shots,” defenseman Colton Poolman said post-game. “They’re a good and hard heavy team and they battled back. We have to find a way to limit turnovers, but in the end– we found a way to win.”

UND struck first with a goal by Ludvig Hoff, who tucked in a rebound after Grant Mismash tried to break SLU’s defense by streaking across the crease for a chance. While SLU’s defense got a stick on Mismash chance, Hoff was able to get Brey out of position for an easy goal late in the first.

The only SLU goal of the night was from Joe Sullivan, who gathered up a deflected shot from Nolan Gluchowski that went of Christian Wolanin and right only Sullivan’s stick. From that point on, it was tight hockey until the end of the game.

UND wasn’t without chances, as they had seven power plays overall in the game, but Adams’ game-winner with 3:49 left was the only one they needed. With a great keep by Colton Poolman who got it over to Christian Wolanin, he passed it down low to Joel Janatuinen, who found a streaking Adams for a tic-tac-toe goal for the eventual winner.

Not without his glory, Cam Johnson stepped up big when he needed with 20 saves on the night, including a 2-on-0 stop after UND squandered a two-man advantage.

“Cam played a great game for us,” Berry said. “He made some tough saves and he held us in there. He’s a reason we got the win tonight.”

Before the game, UND announced that Mike Gornall will be leaving the team to pursue other options. While nothing more has come out from this, speculation is that he was looking for more playing time and thanks to depth of North Dakota, he didn’t feel like he was going to get that opportunity in Grand Forks.