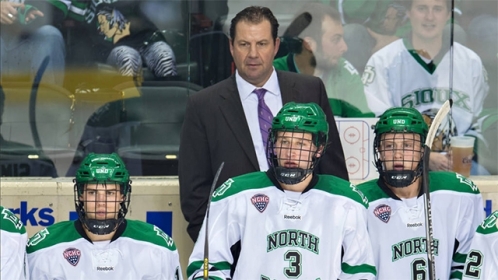 When it comes to this season, North Dakota head coach Brad Berry has quite the problem– but it’s one that he is probably glad to have.

“The difference of this team from the teams the past two years is the depth. It’ll be a challenge on a nightly basis to put a line-up together, and that’s a good thing,” Berry said during the annual UND Media Luncheon on Tuesday. “There’s going to be a lot of competition to be in our line-up night in and night out.”

Depth is something they might need. With the big losses of Brock Boeser, Tyson Jost, and Tucker Poolman, on top of the graduation Gage Ausmus left some holes in a line-up that was a bit of the envy of most teams in the nation. Yet, this year– the Fighting Hawks are without a 1st Round Draft pick on their roster and will really show off their character and make a name of themselves where there’s few big names to be found.

While it is out with the old, it’s definitely in with the new. Eight top-notch prospects are coming into Grand Forks with plenty to prove– especially Nick Jones, who is playing after sitting a year out after transfering from the Ohio State University. One of the most hyped players is Grant Mismash, a recent draft pick for the Nashville Predators and is another player to filter out of the US National Developmental program. Peter Thome could also be someone who battles incumbent netminder Cam Johnson for playing time at some point through the season.

“We have eight guys coming in, but one of them is a junior– so I can’t call them all freshman. We have one true freshman in Grant Mismash who is coming out of high school, but we have four guys who are 20-years-old and have some experience at the Junior A level, so they’ll be a huge part of our leadership going forward,” remarked Berry.

However, it’s all about not only how you start, but how you finish. Last year, UND was the tale of two teams. Though they started out of the gates quick, the hangover of a National Championship caught up to the Hawks. With struggles in the middle of the season thanks to injuries to Boeser, Jost, Poolman, and Johnson to name a few– the young team had to step-up quickly and find a way to develop even quicker.

“We started out of the gates last year strong going 5-0, but then we ran into senior-heavy teams like Duluth and Minnesota that kind of gave us a wake-up call,” said Berry. “We felt as a staff, we were playing the best hockey all year in the last two months of the season going into the national tournament. The NCHC, you all know what it’s all about. It’s a very tough league, but it helps us get prepared. Anyone who comes out of this schedule will have a great chance to hang a banner at the end of the year.”

While they stress the NCHC schedule, non-conference games are what Berry thinks the team needs to put a lot of stock in, as they go up against the Pairwise Rankings when it comes to at-large bids for the National Tournament. Yet in that time, it’s nice to have some of the old guard to come back and let this young team see the shoulders in which they are perked up on.

“We’re going up to Anchorage. We haven’t been up there in a number of years, but I think it’s going to be a good team bonding situation for us,” said Berry. “When we get back, we’ll be home to St. Lawrence, but what’s special about that weekend is that we’ll be honoring the 1987 National Championship team for a 30-year reunion. Guys like Eddie Belfour and Tony Hrkac will be back and it’ll be great to honor the foundation of our program back in our building. It’ll show the guys here what it take to win a National Championship and that that time passes by fast. We won the National Championship two years ago, but next thing you know– they’ll be back for their 30-year reunion. It’ll be a special weekend.”

Berry knows that his players needs to know that this season, while it may go quick, will be a marathon.

“When we open up against Manitoba this weekend, we’ll know a little more about our players and our depth. After that you have to stand by the process in every game and every practice and not get too ahead of yourself.”