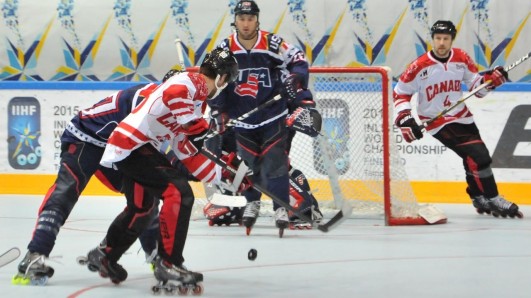 In the last installment, I talked about the NHL Street initiative and how, while still active, doesn’t get enough the rub it should. This installment, I’ll talk not only about the NHL involvement in roller hockey, but the lack of another big roller hockey league or spectacle in our sporting lexicon these days. Sure, I tackled this topic seven years ago, but it bears repeating.

I mean, did you know that there was a World Inline Hockey Championship held in Slovakia in June?? Yeah, me either until I looked on the IIHF’s website about it. The game of inline hockey doesn’t have the heat it once did and it’s almost a shame due to a lot of teams being climates where kids really got into the game by roller hockey being the first means of hockey.

The inline boom happened in the ’90s with Rollerblade being the big company to start capitalizing on it and becoming the Kleenex and Hacky Sack of the generation with the brand being referred to as the activity. Dennis Murphy– who created the WHA and ABA– thought it was time to really get inline hockey into the forefront. That’s how he came up with Roller Hockey International.

With the exposure on ESPN, RHI got a decent following, which was helped with the expanded amount of teams in warmer climate areas with kids who played roller hockey in their communities. RHI had teams everywhere from Vancouver to Miami, but there were plenty of ebbs and flows and movement that made the league become extinct by 2000. However, they did have plenty of NHL power with the likes of Brian Trottier, Tiger Williams, Manny Legace, and Peter Skudra having their time in the RHI.

As the RHI winded down, ESPN had saw what roller hockey could do and draw, so they teams up with David McLane and came up with Pro Beach Hockey. As wild and gimmicky as it was, PBH stood out because of it. Using a ball instead of a puck, playing outside, RAMPS BEHIND THE FRIGGIN’ NET— this had it all. While it only lasted three years because ratings weren’t what ESPN wanted, people still have some recollection of it 17 years after it ended.

Also towards the end of the ’90s, the NHL had their NHL Breakout tournament where they would go to NHL cities, put up an inflatable rink on the weekend, then the teams would come, compete, and that’s that. It was much like how the CBC Play On is today, but with inline skates on rather than just on feet.

While there is a league in Major League Roller Hockey that has some kind of “professional” format to inline hockey, the fact remains that the push it once had has been overshadowed just due to interests waning. Roller hockey has even a club hockey following in colleges around the US. You’d think, however, that with outlet like Twitter, Facebook, and YouTube having live streaming options; someone would think to stream a game and maybe draw some interest into roller hockey again.

Whether or not the roller hockey craze can come back remains to be seen, but in an off-season like this where nothing drastic has happened since the Expansion Draft– maybe hockey fans needs a roller hockey league or some street hockey events to get into and get interested in for them to make the summer months go faster.